In 1970, my 2nd great-aunt, Edith Gum Cheesman (1901-1984), wrote a brief family/town history to be used for the Rossville Centennial. They ended up only using a few facts from it for the centennial book, but the papers themselves ended up in a slim folder in the Rossville library. This is a wonderful historical picture of Cambria full of lots of great details, and I would hate for it to ever disappear, so I transcribed it for my own records and thought I would post an excerpt of the town history parts here.

I have lightly edited it to fill in missing words, and have included pictures found elsewhere when appropriate. Some of these pictures were taken from Monon.org's Bygone Places Along the Monon page for Rossville (scroll halfway down for the Cambria section).

To give context, here are the latest and earliest overhead photos of Cambria I could find, one from Google Maps (2017) and the other from the Indiana Geological Survey (1939), with the locations of a few of the structures she references indicated.

Note that the 1939 photograph was taken after the original elevator burned and before the new elevator was built on the south side of the road. I have not yet definitively identified those two buildings sitting where the new elevator would later be built, but it seems likely one of them was the store Cheesman references "on the south side of the road" where Grange meetings were held from 1932-1938.

Soon after the Monon railroad came through this area, Charles Sharp built a large grain elevator (90 ft. high) right east of the railroad on the north side of the road (the old elevator office building and scale shed have now been remodeled and are now, in 1970, the Burkhalter garage).

North of the elevator were large stock yards with their own office and scales. Cattle, hogs and sheep were driven on foot in large herds to the stockyards and kept there until loaded in "cattle" cars and shipped on Monon railroad.

Across the road on south side of road were coal sheds and more stockyards.

The elevator was built before 1901 and was operated by Charles Sharp for many years before he sold it and moved to McGrawsville, Ind. where he built another elevator. A man named Rice owned it for a while, later J. R. Beach owned it and others owned it. In 1922 (?) it burned while owned by Lester Ruch, Otis Ruch, and Fred Ruch.

Around 1914 to 1929 Monon had passenger trains going each way three times per day and several freight trains and they nearly all stopped in Cambria every day. "Crews" from Cambria traveled on the railroad and kept it in good shape. Some "crews" traveled by "hand-car", some had regular cars in which to sleep and eat while working away from home. Monon Depot was usually a very busy place for many years.

A large "new" Co-op elevator was built in 1942 and is usually very busy. There is a railroad "spur" to the elevator but much of hauling is done in trucks and "semis".

It gives name of Sheriff as Frank P. Coons instead of "Corns".

It has: "Charles Sharp, Dealer in grain, livestock and general merchandise Sec. 8, Owen Twp. Born April 21, 1859. He's a large dealer in livestock. Four years ago he added a grain elevator, and is also interested in a general store in Cambria. Married Nov. 21, 1880 to Miss Pleasy B. Reavis, P. O. Cambria."

Charles Sharp had built the store after the elevator but sold it and my father [Charles Franklin Gum, 1873-1926] bought it off a man named Rippert.

At one time Cambria had 3 general stores, post office, barber shop, blacksmith shop, 3 churches as well as the elevator, stock yards, saw mills, cane sugar mills, 2 room school house with all eight grades, some lodges and social clubs and Justice of Peace (Squire Dan Sharp). Large amounts of maple syrup were made about 1 mile east of Cambria until 1937.

Some of the operators of other stores have been Charles Hawley, Nina Cue, Mattie Venus, Beelers, Floyd Idle, Etc.

Arthur Allen was barber in Cambria for long time and so was Floyd Peterson.

In 1907, I saw the first automobile I ever saw, in Cambria. The D. I. Neher who owned some sawmills lived just west of Cambria, and he drove that automobile, which he called "Queen". He said it was a 1905 model and the first one in the county. It was maroon color, open on each side in front and only one door in back and that door in the middle of the back. There was no top, no curtains, no windows.

On six days a week "huckster" wagons would go out on different routes. They were pulled by patient mules or horses until about 1915 (then some trucks began to be used). In cold weather a small coal stove was used to heat the huckster wagon. People would "call in their orders and hucksters would go out on routes into the country on Mon., Tues., Thurs., and Fri., to deliver groceries, etc., and to buy eggs, butter, dressed rabbits, etc. Then on Wednesday and Saturday they would go into Frankfort and sell the eggs, butter, chickens, etc. (Fear-Campbell bought lots of them.)

There was a large refrigerator (or ice box) built in the east room of Gum's store. The top of it was filled with ice in the winter time--it held lots of ice--and the ice was supposed to last a long time.

A "meat wagon" came from Rossville on certain days to sell meat to anyone who wanted it. The meat was kept on ice.

Around 1923 to 1948 an "ice man" made his rounds in an "ice wagon" (later in a truck). A yellow card was put in a window if he was to stop and leave ice in an icebox. Around 1940 some people got electric refrigerators and he sold less and stops became fewer and fewer.

Many people butchered hogs each winter. Some meat was "fried down", some "cured" or smoked, some canned. Corn and apples were often dried.

On some nice evenings in summer, people came from miles around to see "magic lantern" and free moving pictures on a large outdoor screen in Cambria. The moving pictures were moved by hand or crank.

Several buildings "got" electricity in 1925 and by 1948 most houses had electricity.

In 1912 a Brethren Church across from Pleasant Hill Church was moved to Cambria just west of the railroad on south side of road and used as a church until shortly before it was torn down about 1947. A Grange Hall east of Cambria was moved to west part of Cambria (1911) and became Pilgrim Holiness Church (1911-1920) then became garage, then shelter for a threshing machine and torn down in 1963.

Several other buildings were moved. Logs were put under the houses and big holes were dug in the dirt road and tread-mills were put in holes. Horses or mules walked round and round until ropes pulled house to tread mill, then tread mill was moved on, etc. Man named Fickle owned store on south side of road and had some of moving done.

I was told Dave Siegfried made the bricks in the building that is now the Burkhalter garage, before 1898. He built brick and stone cellars, etc., and made cisterns in bottle shape. He built the house where I live before he was married. The cellar has stone walls and had a bottle shaped cistern in 1929 when I bought the place.

In 1990 after he was married and 4 children (Blanche Gochenour, Inice Krammes, Russell, and Paul--killed in W. War I) he built the house west of mine and lived there for a while. Russell came back and taught school the winter 1914-1915 in Cambria. [For more on the Siegfried family, see my piece From Cambria to Broadway: The Short, Wonderful Life of Russel G. Siegfried]

Ed Thorp had blacksmith shop for many years in Cambria. His shop became an E. U. B. Church for a while after he died. Now a Baptist church is where his shop used to be.


Marie Pearcy said she and some other girls helped put bolts and nuts in a buggy factory in Cambria, west of railroad on south side of road and east of a big sheep barn where H. A. Rice had lots of sheep. She also helped in one of the sugar cane mills before World War I.

Lot of farmers really raised cane around Cambria 1915-1917 and about 1936-1938. When cane reached stage of growth, it was stripped, cut and hauled to mills where the stalks were crushed between large rollers and the juice went into large cooking vats to make syrup (or molasses) or sugar.

Boys liked to cut off pieces of cane and chew them.

More Cambria information--By L. P. Hodson 7/25/87
The school was closed in the spring of 1927. The East room of the 2 room school was not used as a classroom after the year 1917. All eight grades were taught by one teacher in the West room. The room was heated in winter by a big, round, wood-fired furnace in the northwest corner. The school's shingle-roof caught on fire several times, but was always put out by a hand-brigade with buckets of water from the school's hand pump.


Another Cambria organization was "Cambria Detective Company". From my information, it was in operation 1896 to 1911 or longer. Some secretaries of the company were: John L. C. Miller, Warren Baker, Warren S. Armentrout, Fred M. Gaylor, James E. Calloway, and Eldo Hackard. Some presidents of the company were: John M. Hayes, James E. Calloway, J. M. Watson, Warren Baker, L. B. Beach, and Warren S. Armentrout. 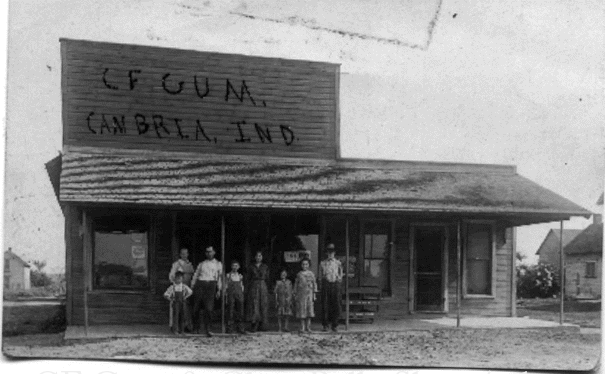 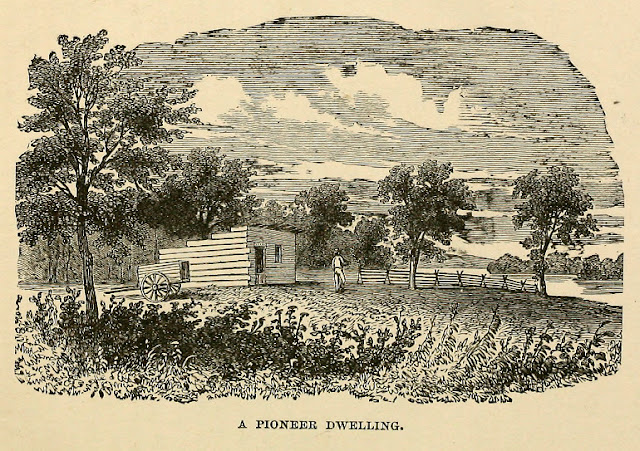 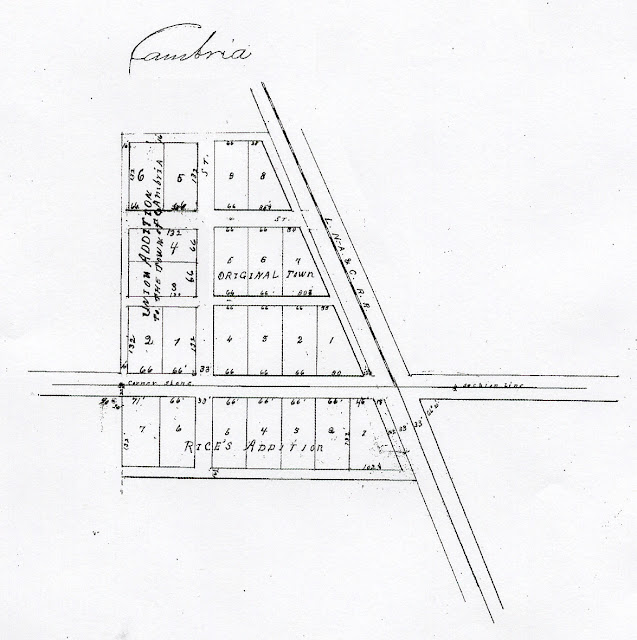