An Accusation of Voter Fraud in Carroll County 1859

This is William K. Compton (1824 - 1873), whose photo I recently discovered in the archives of the terrific Carroll County Historical Museum, which I highly recommend subscribing to if you are from the area.

William was a dry goods merchant and postmaster in Rockfield, Carroll County, before moving to Lafayette to become a factory worker. (He was also, incidentally, my fourth-great-uncle.) He died at the age of 49 of some sort of accident that fractured his skull while in Indianapolis. But before that, he got into a tiff with the editor of a local paper who was, shall we say, much more enthusiastic about the Democratic party than he was about the truth.

That editor was Milton R. Graham of the Delphi Weekly Times, and the incident began on Saturday, September 17th, 1859. (That link is to the terrific newspaper archive for Carroll County.) Here, to give you an idea of the level of journalism we are dealing with, is the actual headline from the paper (transcription below): 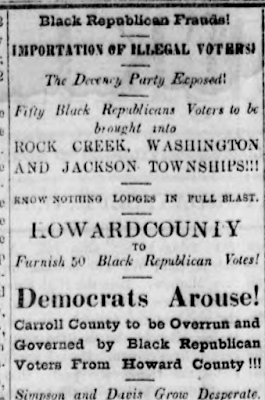 The term "Black Republicans" originated with slaveholders expressing scorn for the party of Lincoln, and does not here refer to actual black Republicans (obviously). But the eight stacked headlines there (apparently he could not choose just one) are about William Compton supposedly holding secret meetings in his store so that he and his conspirators can plan how to import illegal voters to steal the election. The tone of overwrought moral outrage is very amusing. Here is the piece in full:

On Tuesday, the 5th day of September, instant, the Black Republicans held a midnight caucus at Rockfield, in order to devise means to defeat the "d----d old liners," as they style the Democrats. There were about 20 persons present. Rock Creek, Jackson, Deer Creek, and one or two other townships were represented. The place of meeting was the store of W. R. Compton.

When the Company were all assembled, one of their number stated that in order to beat the d----d old liners it was necessary to import 50 or more votes into the county, as the county had been polled, and the old liners had from fifty to a hundred majority. Several persons present donated various sums of money for this purpose, and it was agreed to send a letter to an Honorable member of the State Senate from an adjoining county and have the voters sent from there. The voters to be imported we're to be distributed, one and two at a place, among wealthy respectable Republican farmers. The Republicans are daily at work securing places for these imported voters among those farmers who they can see in town, while others are doing the same thing throughout the county.
The Republicans acknowledge that the county is Democratic from 50 to 100 votes. They wish to control the majority of the legal voters here, by importing voters from adjoining counties.

It was but two weeks ago that the Journal came out with a very pious article on preserving "the purity of the ballot box," the "palladium of our liberty," &c. The truth now appears to be as we intimated in our last issue, that this was only a blind to cover up their own wickedness, and the frauds they themselves contemplate at our next election. Oat upon such hypocrites who would "steal the livery of Heaven to serve the devil in."

This importation of voters has been practiced by the same party for the three general elections last past. This thing was never done, or even contemplated, until the renegade Democrat, Matthew Simpson, connected himself with the opposition. He has cautiously insinuated himself into the good graces of the Republicans, until he leaves them withersoever he will. And many, very many, who would, two or three years ago, have scorned to have any complicity in this importation of illegal voters, have listen to the voice of the siren, until their consciences have become callous, by having been led to believe that there is no such thing as a moral wrong or sin, if you can only prevent it from being found out.

But we have found them out and we will continue to publish their doings to the world. So will all the names of the illegal voters be published, as well the names of those who employ them. Nora is this all: every person who polls an illegal vote will be punished to the extent of the law.

We do not charge the whole Republican Party with encouraging the importation of illegal votes by their leaders, or even a knowledge of it. For we know there are hundreds of them who would scorn to do such a thing, and who would not support a man who would be guilty of it.

We charge it, however, upon the Black Republican candidates and leaders, that they have by their polling of the county, made it Democratic by from fifty to a hundred votes, and that in order to overcome this Democratic majority, they are engaged in a systematic plan of importing votes from Howard and adjoining counties.

Now, we appeal to the honest, law-abiding Republican voters of Carroll County to stamp with the seal of their disapprobation such open, high-handed profligacy and corruption in their candidates or leaders.

Are you not willing that the majority shall rule? Will you allow imported voters from Howard County, and elsewhere, to elect officers to govern us in Carroll County? We do not believe you will.

Many democrats left us in 1854, and have since acted with the opposition, and to them we would say, can you continue to net with the party whose leaders in this County sacrifice all that is moral and honorable upon the altar of mammon, and who acknowledge no rights or laws too sacred to be invaded and broken with impunity. Inform yourselves with regard to the truth of what we have said, and if you are satisfied that we are right, come out from among them, and array yourselves once more under the banner of the Democratic party which has always been national in its character, which regards the interests of all, upholds the full and faithful execution of all laws, and tramples upon the rights and privileges of none.

In the pious article above alluded to the journal charge that there was a democrat making almost daily trips up and down the Rail Road for the purpose of importing voters, which we branded as false, and the name of this man demanded, but it has not yet been given, and the charge we believe was made, with full knowledge of its falsity, and for the sole purpose of covering up the astounding and atrocious fraud which the revelation of the proceedings of the Rockfield meeting has brought to light.

Mr. Editor:--I see an article in the last number of the "Times," in which it is charged that on the evening of the 5th instant, there was a Republican meeting at the "store of W. R. Compton," of Rockfield, for the purpose of making the necessary arrangements to bring illegal voters into our county for the coming election. Now, as I am the only person in Rockfield of the name of Compton, I am led to suppose that I am the person referred to.

In answer to that article, I pronounce it an unmitigated falsehood from beginning to end. There never has been a Republican meeting in my store of any character, and certainly not of the nature of the one indicated in the Times. I am satisfied that this base fabrication originated with certain parties for the purpose of injuring me in my business, or to shield them and some of their own iniquities. I am not a politician, though I readily own that my sympathies and vote are always with free Republicanism. Nor do I think that a man with one drop of American blood in his veins, would countenance the importation of illegal voters. I hope, in justice to myself, that the editor of the Times will retract the charge made against me, otherwise I shall post him as a liar and a poltroon.

By a card in the Journal of this week this gentleman denies our statement concerning the recent meeting held at Rockfield by the black Republicans on the 6th inst., and threatens to "post us as a liar and a paltroon" if we do not retract the charge.

Though we believe every statement we made to be strictly true, in justice to ourself we must say we had no personal knowledge of the meeting, but represented the matter as it was stated to us by J. B. Milroy and George Kuns. We do not make this explanation through any fear of our boastful enemies; but simply to shield ourself from the charge of misrepresentation. We will publish no charge knowing it to be false, and the high authority from which we received our information respecting the Rockfield meeting leaves us no ground  doubt its truth. Our citizens know Col. Milroy and Mr. Kuns, to be too honorable to make any charge which they cannot sustain by facts.

Now we not only do not retract the charge, but upon the authority we have believe it to be strictly true. The meeting was held at a late hour in the night, probably when Mr. Compton was at home in bed, and we are willing to give him the benefit of this presumption. We are informed that the store of Mr. Compton is not the place where the Rockfield conspirators usually hold their meetings; nor was the one we alluded to the first nor has it been the last for the purpose of accomplishing the object we charge upon them, of importing voters. The vacant House formerly occupied by Mr. G--, has been and still is, their private place of meeting.

We would gladly if in our power relieve Mr. Compton from the odium that would attach to any person from the fact of his premises being used for the purpose of holding treasonable meetings, for the object we charge, even if he himself was not present, or even knowing to it.

So he will have to "post" us. But before he does so we would advise him to enquire into the matter a little--Perhaps Commodore P. Freeman could give you some light upon the subject. We would like to understand how Mr. Compton can know what is going on at the store when he is at home and in bed, especially when other persons have the means of ingress and egress. "Post" away Mr. Compton, and there will be some more to help you if they do not think we are too well posted already. 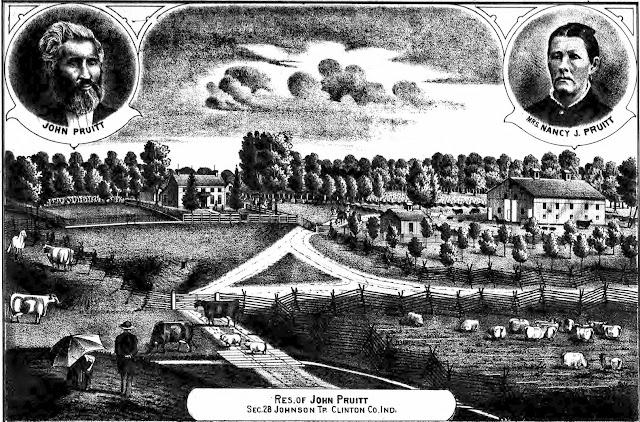 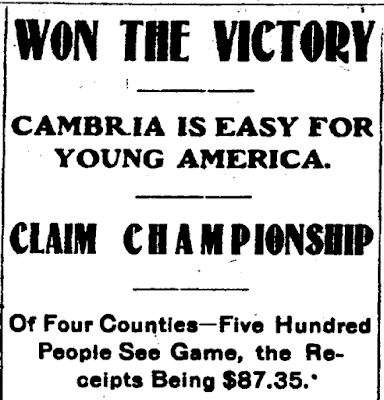 Fiddling and Football: Rivalry Between Carroll County and Cambria, 1901-1902